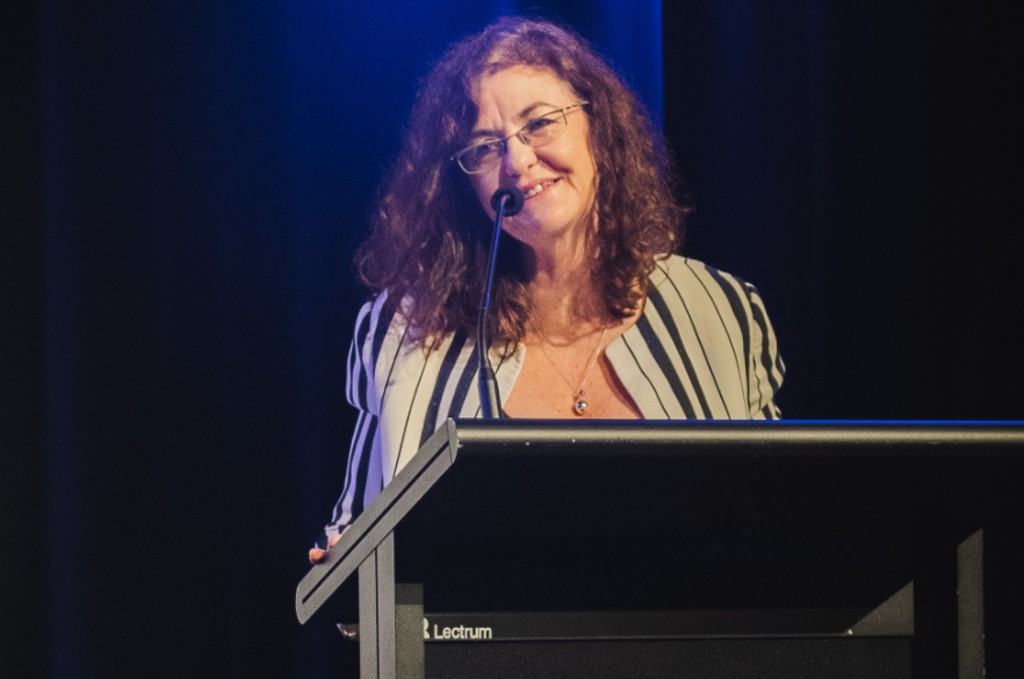 Madonna King on the age of instant gratification

King was a keynote speaker at the Women and Homelessness Forum, which drew a sold-out crowd to the Queensland Multicultural Centre to hear a range of speakers discuss this year’s theme, ‘Building Resilience — Surviving and Thriving’.

King, the mother of two teenage daughters, served as chair of the Queensland Government’s Anti-Cyber Bullying Taskforce in 2018, and gained a wealth of insight into the minds of young girls by speaking to more than 1500 of them over the course of writing her recent best-selling books, ‘Being 14’ and ‘Fathers and Daughters’.

“The iPhone has an enormous influence [on teens], and it’s not all bad,” King told the crowd.

King said the “instant gratification” today’s teens have come to expect makes it difficult for them to develop resilience and persistence.

“The power of ‘now’ is a huge influence,” she said.

“There’s a story I tell students, and if you have a child, I recommend you tell them this. Ask them if they know how we used to take a photograph back in the old days, when we were their age. Remember?

“First we would line up the photograph, because we were responsible for the focus. There was no such thing as automatic focus. Then, once we’d take a photograph, we’d put the camera away, because we had to take another 11, or 23, or 35 photos before we could see any of them. That was never the same day, or even the same week. Memories were built up over time.

“Once we’d taken all our photos, we’d open the back door of the camera, and take out the film… then we’d take the film to the pharmacy. That adds to the story, because dropping it off meant a trip on foot or in the car. Downloading or uploading was not an option.

“But what happened a week later? We went back to the pharmacy with two things — money to pay for the photographs, which meant we considered each one that we took, and something else, too… a delightful sense of anticipation. That sense of anticipation has been stolen from our children, and I think as adults in their world, we have to find a way of gifting it back to them.

“It’s only an anecdote, I know, but it points to that issue of persistence, and how it is so lacking in our everyday transactions now. We no longer value it.

“I wrote the biography of Professor Ian Frazer, who developed the science behind the cervical cancer vaccine. Do you know it took 15 years of experiments, almost every day, to come up with the science that allowed the vaccine to be created? What would have happened if he’d stopped after one year? Or even 14 years?

“FOMO — fear of missing out — is driving our children’s motivations, and that means they don’t get to stop and hear white space. They don’t know who they are or who they want to be. They’re connected to the technology, not the person at the other end of the technology.”

King said girls are “crying out for connection”, but those cries aren’t always being heard by their parents.

“Last week I was in Melbourne, running a workshop for teen girls. One of them, a 14-year-old, came up to me afterwards and said, ‘Can you just tell me how I get people to be nice to me?’

“That age, around 14, is the epicentre of this teen turmoil. That is well recognised in the school system, but not so much, I think, in our families and the community at large. We have to recognise how difficult it is for them, and respond in a way that influences and connects, instead of driving a wedge between us.

“We, as parents, can be so much more influential in our daughters’ lives, but we have to lead from the front, because our daughters will not ask for our help.”

Madonna’s books, ‘Being 14’ and ‘Fathers and Daughters’, are available online or through any good bookstore.

The Lady Musgrave Trust is Queensland’s oldest charity, and is committed to making a difference in the lives of those who find themselves homeless and in need at difficult times in their life.

We focus specifically on women and children’s homelessness throughout Queensland and provide young women up to the age of 30 with low cost accommodation and support services in our portfolio in Brisbane and Ipswich. We also create and distribute The Handy Guide for Homeless Women and host a unique Annual Forum focused on women and homelessness.